Bergsmannen has interviewed ROXON during customer visit at LKAB. The article highlights our long lasting relationship and how important communication has always been in this trip. Short version of the story available here in English. 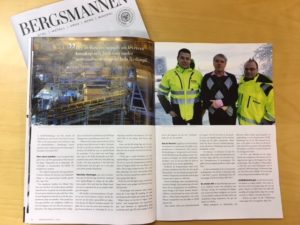 Roxon and LKAB/Malmberget made first business together already in the 1960’s. Since then several new belt conveyor projects and modifications have been delivered to the mine.

Magazine “Bergsmannen” got an opportunity to follow Roxon on one customer visit at LKAB/Malmberget. Vesa Sarromaa (Roxon Finland) and Peter Wittikko (Roxon Sweden) were visiting Mikael Allden (LKAB). Vesa is responsible for project sales in Sweden and has delivered two projects for LKAB in Malmberget. Peter is working in Haparanda since many years and is now responsible for component sales. Vesa and Peter appreciate visiting Mikael. Mikael likes to tell good stories of former times projects. Mikael knows what is working and what is not after over 40 years in the business. The long experience LKAB personnel has makes the company a special customer, says Vesa. “Mikael and the others here know our products at least as well as we ourselves and most of all they know everything about iron ore that our conveyors handle”.

Roxon is now owned by Nepean conveyors, the biggest privately owned Australian company within mining service, energy and industry. Since many years Roxon has been focusing on delivering and developing equipment for mining applications and company is one of Scandinavians biggest suppliers of conveyor systems to mines, harbors and energy companies. Roxon’s clients can be found in 166 different countries. LKAB/Malmberget was the first customer that Roxon’s new owner visited. Nepean CEO, Miles Fuller, has met all employees and many customers since November last year. “New owner visited LKAB in Malmberget already on the second day of ownership”, says Vesa.

Often it is the projects that decide whether the supplier wins or disappears on the ever so hard international market. Technical solutions, price and keeping promises given by supplier are the most important things in big projects says Mikael. But with his experience Mikael thinks there is one most important thing to make a project successful: “Everything is about the communication.” If there are problems, like there always tends to be in big projects, it’s important that supplier and client can discuss it together. Good communication is vital for long term relationships and we have always had a good dialogue with Roxon, says Mikael.

Roxon wants to be involved during the whole lifetime of material handling- from project and installation to new components and modifications. In northern Sweden it’s Simon Salmela, based in Gällivare, who maintains conveyors and components. Peter is also active player for customer support. Lately he was involved delivering a belt monitoring system that detects belt damage for LKAB. “Conveyor belt of 3,2 km (2 miles) is subject to many risks. It conveys both ore and three meter long steel bars that can cut the belt. Warning system is automated. It’s important to solve the problem fast”, says Peter. If the “red line” conveyor stops for longer period it costs a lot of money and this may never happen.

Mikael also emphasizes the importance of safety for purchase of conveyor systems. LKAB has over 500 conveyors in Malmberget and safety is in focus during all project phases. In the old days there were a lot of accidents but now the requirements are so high there are practically none. But you should never relax when it comes to safety. If there’s a conveyor 1,6 km long and 1 km below the ground it’s vital with good communication all the way.